It is possible to run Artisan on a tablet if the tablet is running a full copy of Windows or Mac OS X. The power and performance of tablets varies greatly as it does in laptops. Choose wisely.

The full version of Artisan does NOT run on an iPad or any iOS or Android device.

We are considering limited operation apps that will compliment an Artisan installation for inventory counting,  product look-ups, and possibly more. Stay tuned.

For Artisan 3.5: Artisan would need to utilize the remote operation feature and not be connected wireless except to allow  DropBox to synchronize the remote files. Artisan is NOT live in this scenario.

For Artisan 4.X: Artisan can run wireless or run remote using Artisan’s exclusive Remote Operation feature. (which means you can take it to your warehouse without Internet, for example). Artisan is live with the wireless solution and almost live with remote operation as long as you have an Internet connection. Without Internet the remote operation feature works fine, it is just not updating changes during that time and will automatically catch up when you regain your Internet. For wireless connections we require wireless standard 802.11g (54 Mbps), 802.11n (300Mbps), or the newer 802.11ac (1000 Mbps). You can run over a virtual private network (VPN) if you are working away from the store, but your connection speed will be less and Artisan will be slower. Efficiency is going to depend on how large your data is, machine memory, central processing unit (CPU) type and your internet upload/download speed.

Why the difference in 3.5 and 4.0? 4.0 uses a more robust SQL server that is less vulnerable to data loss in the event of a lost connection. Wireless network connection loss is very common (especially with VPN) and normally occurs without notice. Artisan 3.5 is not equipped for such interruptions. For a good inexpensive VPN we recommend LogMeIn’s Hamachi.

The Pros and Cons of Tablets:

The obvious Pro is the fact of how portable the tablet is. The Cons are the fact that there is no keyboard except for the on-screen one. Each tablet may have it’s own solution to this problem. Artisan does NOT provide an on-screen keyboard at this time. We do have a numeric pad in the sales screen. Practice opening and closing the keyboard on the tablet screen before making a purchase decision. The Elo Tablet has a keyboard icon that hangs out on the left of the screen and can be fairly easily recalled as needed. Definitely not ideal for creating new inventory records, but will work for sales or inventory counting. Attach a Bluetooth or USB bar code scanner for greater efficiency. 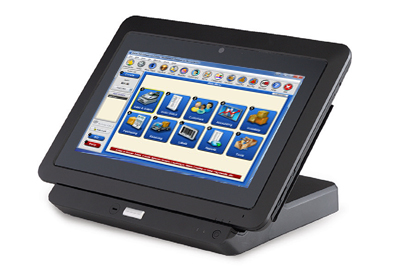 Elo’s rugged Touch Tablet with built-in credit card reader and just one USB port. Shown on the docking station which adds more USB and other ports.